TGS Group, founded by Oleg Tinkov, on September 22 announced the sale of its main asset, Tinkoff Bank, in a publication on the London Stock Exchange website. The buyer in this transaction is Yandex, which also confirmed the accuracy of the information. The deal is valued at $ 5.5 billion. It is known that the deal will be paid for in cash and Yandex shares. In what proportions the distribution of funds will be temporarily not announced.

Details of the sale of Tinkoff Bank to Yandex

According to preliminary agreements, Yandex will give $ 27.64 per share of Tinkoff Bank. The exact payment for the complete set is $ 5.48 billion.

The final stage of the agreements between the two companies will be directly indicated on the passage of the necessary checks by Tinkoff Bank. The companies have intentions to complete the deal, but a decision has been made, and there are no approved terms of sale yet. Additionally, the deal must be approved at the meeting of shareholders of the IT company.

On September 23, Oleg Tinkoff commented on what was happening:

It’s too early to talk about the sale of Tinkoff Bank, since the deal with Yandex has not come to the final stage. I would like to point out that this is not a sale, but a merger. I respect Yandex immensely, we are two of the best IT companies in Russia, there may be a lot of synergies there. I will definitely stay at @tinkoffbank and work on it. 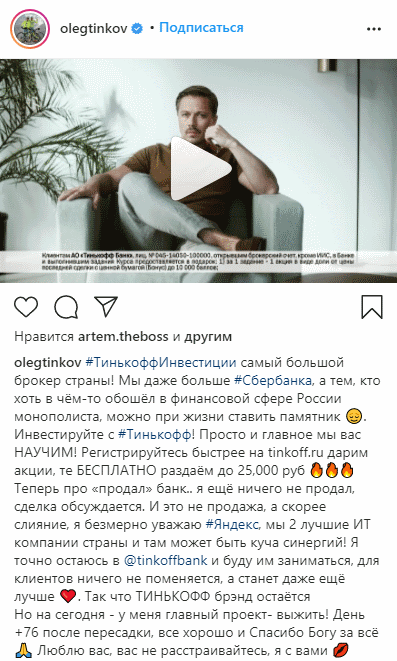 Tinkov also stressed that this process will not affect the convenience of using the service for customers:

On the contrary, the merger will provide an opportunity to make the bank even better

Also, in the morning, September 23, Yandex shares on the US NASDAQ stock exchange rose by almost 12%. Against the background of this news, no transactions in Yandex shares were made on the Moscow Exchange. They stopped selling them, but there were many who wanted to buy Yandex shares.

Why would Yandex buy Tinkoff Bank?

Yandex in the twentieth of June notified the media about the division of assets with Sberbank. PJSC Sberbank of Russia received 25% of the company’s asset called Yandex.Money. After such a “merger”, the service will soon abandon Yandex in its name. The two companies are closing this deal in September 2020. The amount of the agreements is 2.4 billion rubles.

The IT company decided to take a large chunk of Yandex.Market and acquired 45% of the shares for 42 billion rubles. The Russian bank has held a “controlling stake” since 2009, and now it is again in the hands of a Russian multinational company.

“The deal with Tinkoff is a new vertical of fintech, with the help of which Yandex will be able to succeed in this segment in the next few years. This “step” seems logical, “says Aton analyst Viktor Dima.

In addition, such transactions show that “the IT company shows that it has reached the ceiling in the advertising segment and is already practicing a retreat from the creation of new projects within the company. Deal after deal, Yandex acquires and is ready to acquire a ready-made business, ”says Andrey Rusetskiy, asset manager of BCS Management Company.