Apple has offered its customers the Apple iPhone SE 2020 smartphone as a budget alternative to top-of-the-line products. Although it has a lower cost, it uses a powerful, powerful processor and the latest version of the iOS operating system. With all the features found in a more productive lineup, this iPhone has become a suitable option for those who do not want to overpay for the latest models.

Outwardly, the company tries to maintain its own design, making a minimum number of edits to it. This applies not only to the device itself, but also to its packaging, which has retained its traditional appearance for more than a year. It is with her that it is worth starting the review of the Apple iPhone SE 2020, because the first impression is formed precisely by the appearance of what is on the counter.

The first thing that the user will see when taking the box with the Apple iPhone SE 2020 smartphone in his hands is its front side, which shows the display itself, the frame around it and the familiar Home button. On the side edges of the box there are brand logos, and on the back are the characteristics of the Apple iPhone SE 2020 and service data, such as the serial numbers of the device. 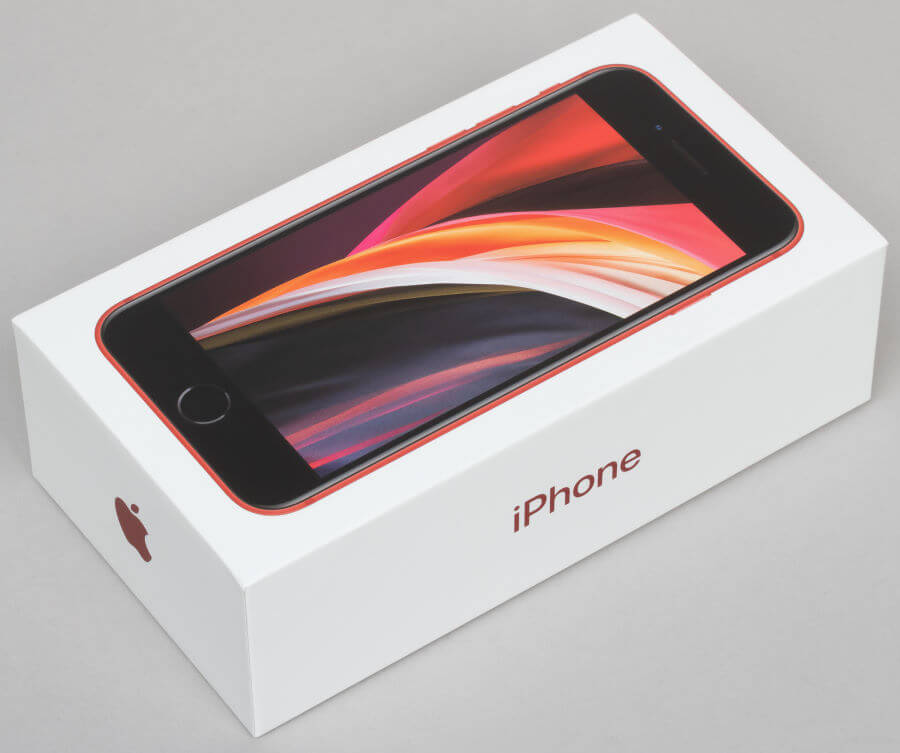 Outwardly, the company tries to maintain its own design, making a minimum number of edits to it. This applies not only to the device itself, but also to its packaging, which has retained its traditional appearance for more than a year. It is with her that it is worth starting the review of the Apple iPhone SE 2020, because the first impression is formed precisely by the appearance of what is on the counter.

The first thing that the user will see when taking the box with the Apple iPhone SE 2020 smartphone in his hands is its front side, which shows the display itself, the frame around it and the familiar Home button. On the side edges of the box there are brand logos, and on the back are the characteristics of the Apple iPhone SE 2020 and service data, such as the serial numbers of the device.

The back cover is made of glass. It has a protruding camera module, familiar from the eighth model. The side faces received in the usual places buttons for volume control, display lock and mode switching. At the bottom there is a connector for connecting a cable and a pair of speakers. What this model lacks is a jack for standard headphones. However, given the popularity of wireless models, this is not such a big problem.

In general, the body practically does not differ from the iPhone 8, except for the arrangement of some small elements.

Despite the fact that this model is one of the cheapest at the moment, it has received quite powerful hardware. It is on a par with the flagship offerings of the same year due to the use of a proprietary processor.

The weakest part of the Apple iPhone SE 2020 is its small display. It measures just 4.7 ”, which is very small by modern standards. The matrix resolution is 1334×750 pixels. However, what many may consider a disadvantage may become an advantage for some. 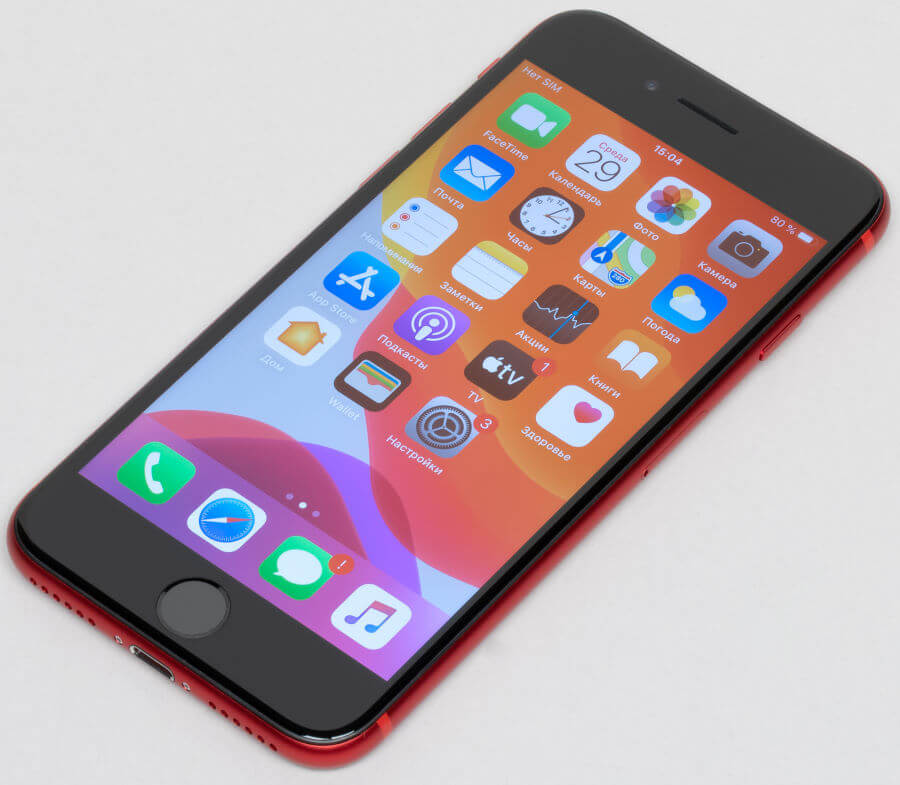 Nowadays, it is quite difficult to find a performance model that does not look too large and fits in a regular pocket. Thanks to the use of a high-quality IPS-matrix, the manufacturer managed to achieve high image quality even at a relatively low resolution, so the gadget is convenient to use. And the presence of the TrueTone function further enhances comfort.

The strongest point of this model is the Apple A13 Bionic processor. This is exactly the same type of SoC as in the flagship version of the iPhone 11. The most surprising factor is that in some tests the budget employee bypasses its more expensive sibling. This is due precisely to the presence of a low-resolution display, which allows more power to be spent on data processing.

The amount of effective RAM is 2.88 GB. For an Android smartphone, this would be a very modest figure, but the high level of optimization of the latest iOS version allows you to comfortably open up to several applications at the same time, and quite demanding ones. 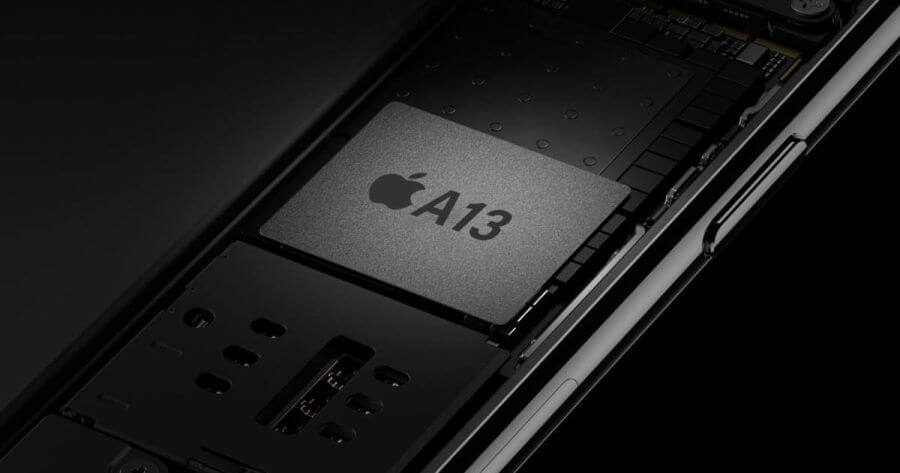 The user can store information on the built-in storage. The buyer can choose between revisions with 64, 128 or 256 GB of disk space. Of course, part of it is occupied by the operating system, so if you plan to shoot a large number of 4K videos or store large multimedia files, you should choose the version with more memory.

In order to be entitled to be called a telephone, the gadget is equipped with a modem that works in all networks up to the fourth generation. Unfortunately, Apple iPhone SE 2020 does not have 5G support.

But it can connect to all modern types of Wi-Fi networks, supports pairing with other devices via Bluetooth version 5.0, has a built-in NFC chip for making payments via Apple Pay and is equipped with all navigation modules that improve the accuracy of positioning while simultaneously activating.

The device has a battery that is completely identical to that of the iPhone of the eighth series. Its capacity is 1821 mAh. This would not be enough for everyday use, but the Apple iPhone SE 2020 smartphone allows you to turn on the intelligent power distribution mode, which helps to use it sparingly and only for its intended purpose. 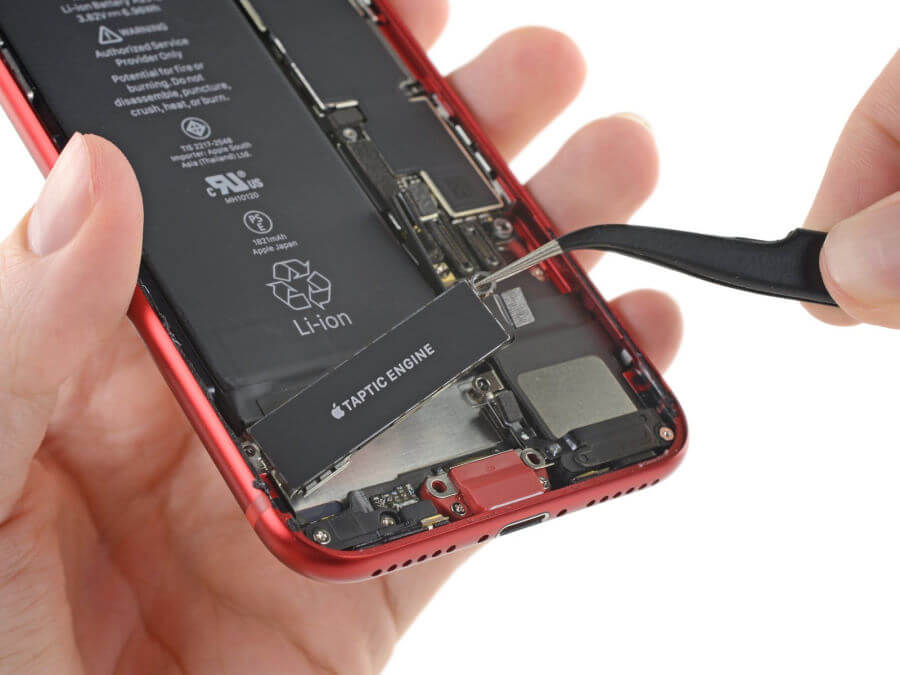 In addition, thanks to support for fast charging technology, each user can quickly replenish their battery level. This can be done with the help of wireless stations working according to the Qi standard.

Despite current trends calling for increasing the number of cameras and the size of matrices in them, Apple is taking a different path and installs only one module, which has a resolution of 12 MP at ди / 1.8 aperture. This may seem like a very modest result, but the company always uses the best optics, and all photos are processed using an intelligent system, so you can expect quite high-quality photos from the Apple iPhone SE 2020.

The only weak point of the iPhone 2020 SE camera is shooting in low light. The night shooting function is completely absent in the firmware, so the quality of photos drops noticeably if there is not enough light. This is especially felt in the evening, or if the pictures are taken in a poorly lit room. 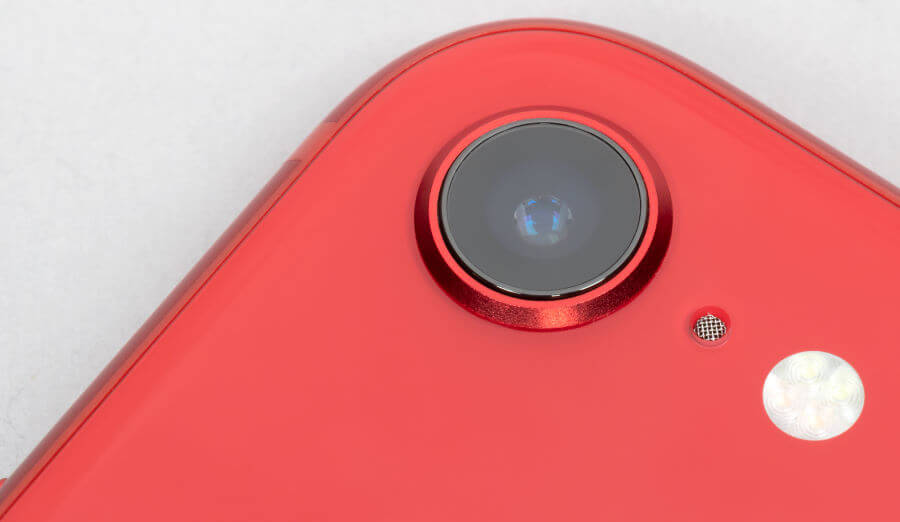 As for video shooting, in this matter, the Apple iPhone SE 2020 smartphone shows excellent results, recording smooth videos in 4K resolution. Surprisingly, even when compared to the iPhone 11 Pro Max, the quality is about the same.

Separately, I would like to note the camera designed for video conferencing and taking selfies. A module with a resolution of 7 MP is installed here, which is not inferior in quality to the main one. This means that in good light, you get detailed, crisp photos that can be used as avatars on social media. 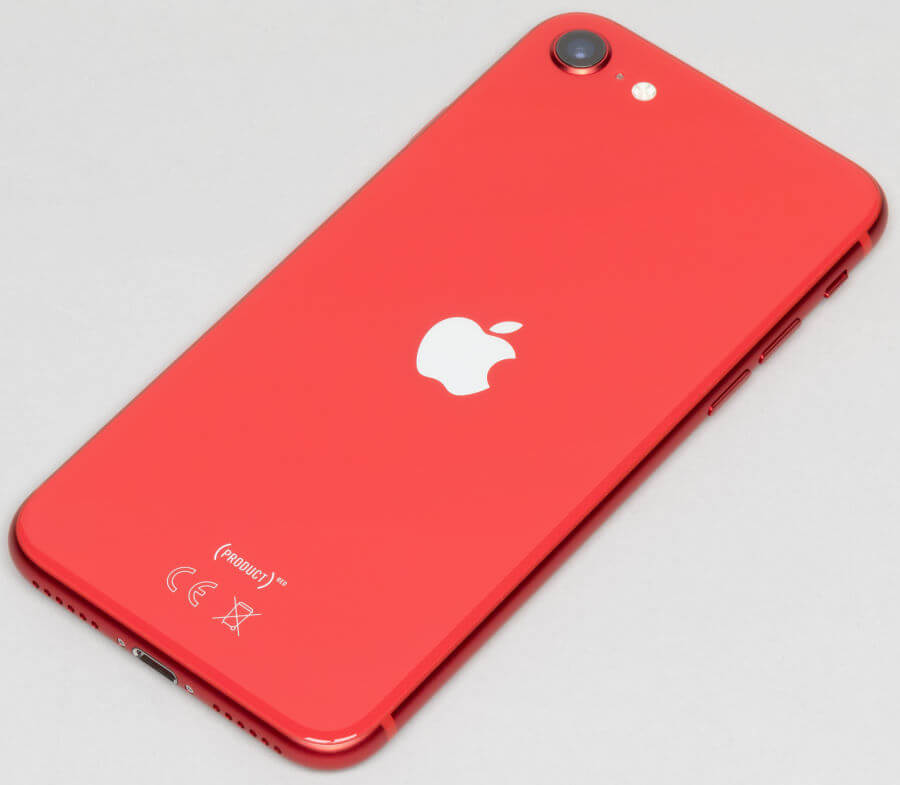 This camera will delight fans of video filming and streaming. It is capable of recording high quality 1080p videos at 30 frames per second.

Comparison of the smartphone Apple iPhone SE 2020 with analogues

The main competitor of this model is considered the new product from Samsung Galaxy A51. They are in roughly equal conditions, since they are junior models in the production lines of their developers. In order to compare the Apple iPhone SE 2020 with its rival and determine which of the devices has the advantage, you should analyze their main differences and highlight the pros and cons of each model.

For many, the Samsung model will be an indisputable favorite in this competition. But there is no need to rush to conclusions. Yes, the iPhone has an outdated design, but it is highly practical. As already mentioned, compact models are less and less common, so if size is the deciding factor, the “apple” gadget definitely gets a point in its favor. 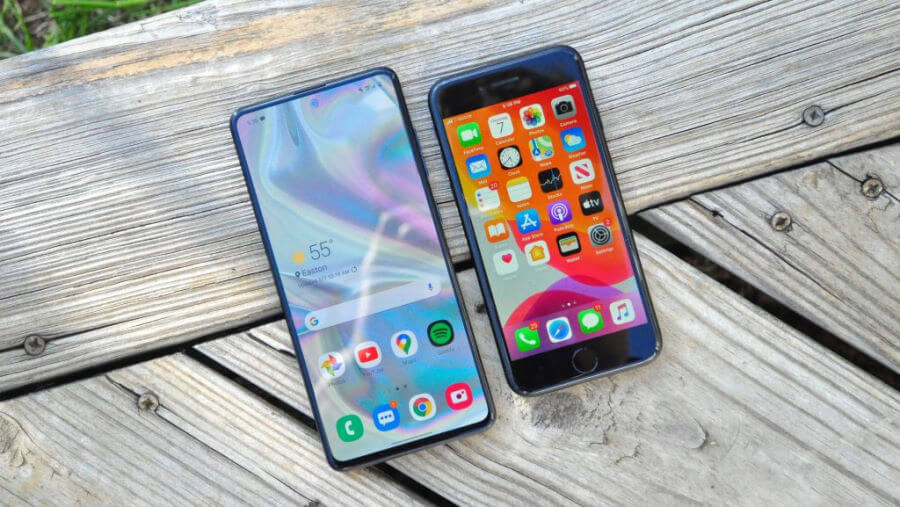 Samsung surpasses it in space efficiency. Almost the entire front surface is occupied by an AMOLED display, which makes the image much larger.

At first glance, in this test, Samsung should also leave Apple with a nose. It has a powerful processor, plenty of RAM and a powerful graphics core. However, do not forget that the Cupertino-based company has equipped its “baby” with a top-end processor, and this is clearly seen during synthetic tests.

So, Samsung when testing with Antutu can only score about 332 thousand points. iPhone breaks out far ahead, giving the result of 492 thousand. This became possible not only thanks to the powerful processor, but also due to the optimization of the operating system. Such indicators make it clear that if you need to work with demanding programs, the iPhone has practically no competitors in its niche.

The rest of the models are very similar to each other. So, both one and the other do not support the ability to connect to networks of the fifth generation. Samsung seems to have a more capacious battery, but due to not the most economical processor, it discharges at about the same speed as the iPhone. 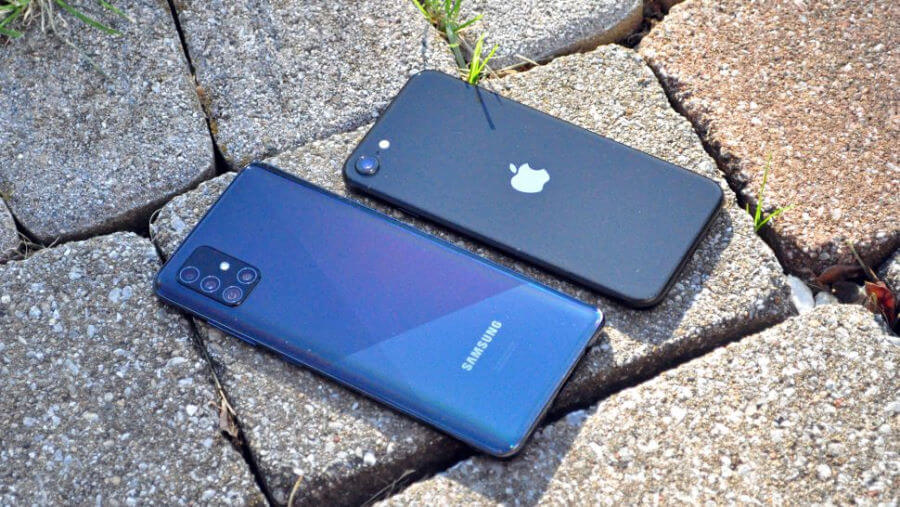 The main parameter for which the Korean gets an unambiguous superiority is the camera module. Here he is really excellent and is able to make high-quality shooting not only in the daytime. This is due to the presence of four main cameras designed for different modes. The largest of them has a resolution of 48 MP.

But, if you need to record video in 4K, development from the United States will still win. The fact is that it supports shooting at 60 frames per second, which provides a sufficient level of smoothness. But Samsung can offer its users only 30 frames per second, and not only at maximum resolution, but also when recording at 1920 x 1080 pixels. This is definitely not enough for a high-quality vlog.

Smartphone APPLE IPHONE SE 2020 – the price of a smartphone and where is it better to buy it?

Everyone can buy an Apple iPhone SE 2020 in a basic configuration with 64 GB of internal memory at a price of 35 thousand Russian rubles. It is available for sale in many stores, but preference should be given to those places where sales are carried out under license from Apple. This will provide buyers with the following benefits:

The most expensive variation of the Apple iPhone SE 2020 is sold at a price of about 47 thousand rubles. Considering that the difference in cost is not so big, you should think about buying the maximum configuration, because then problems with free space will never arise. 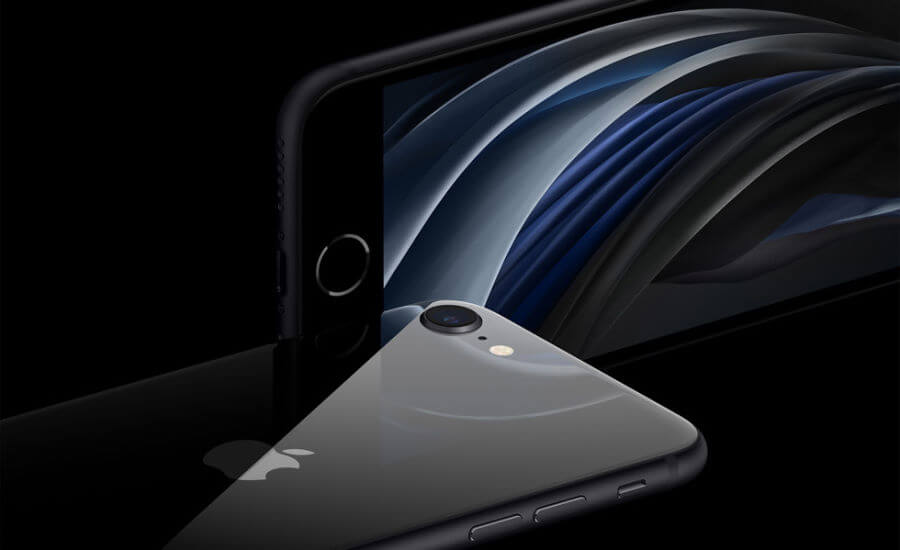